Suzuki Motor Corporation has launched the all-new Alto minicar in Japan on 22 December, 2014. Suzuki has launched the all-new, eighth-generation Suzuki Alto in Japan. Suzuki claims that the eighth-generation model, a Japan-only model, has the lowest fuel consumption among non-hybrid gasoline vehicles in Japan, achieving a fuel economy of up to 37.0 km/l (2WD and CVT).

The new Alto is equipped with a 0.6-litre DOHC petrol engine that produces 48 hp or 51 hp and 58 Nm or 63 Nm of torque depending on the transmission opted. There are three transmission options available – a standard 5-speed manual transmission, an improved CVT or the new Auto Gear Shift (AGS). The new model has seen a weight reduction of as much as 60 kg.

Alto was first launched in May 1979 in Japan as a utility minicar with the ease of driving and use, economic efficiency, and inexpensive price setting. It became popular mainly among female customers and pioneered a new market for minicars.

Since its launch, Alto had evolved in terms of function and performance in line with the needs of the times. Throughout its 35-year history, Alto has been favored by many customers, with its accumulated domestic sales of approximately 4.83 million units*1. It is a model that represents Japanese minicars.

The all-new eighth generation Alto has adopted a newly-developed platform for the first time and achieved a weight reduction of 60kg*2 by thoroughly reducing its weight. Along with the enhanced efficiency of the powertrain, it has realized fuel consumption of 37.0km/L*3, the lowest among non-hybrid gasoline vehicle in Japan*4. It also combines light and steady driving performance.

While adopting a simple and stylish design with the exterior emphasizing quality and proportion, and the interior combining design and function, it also realizes roomy cabin space with the longest cabin length in its class*5, owing to its stretched long wheelbase.
Further, by incorporating advanced safety technologies such as the Radar Brake Support collision-mitigation braking system, the Alto has evolved in fuel efficiency, driving performance, design, and safety performance, while brushing up basic performances including the ease of maneuverability and handling.

Main features of the all-new Alto

Features of the Alto

1. Combined light and steady driving performance with the lowest fuel consumption among non-hybrid gasoline vehicle in Japan*4 of 37.0km/L*3.

Transmission with pursuit on fuel efficiency and driving

2. Achieved weight reduction of 60kg*2 as compared to the conventional model. Realized the lightest weight*6 of 610kg*7.

4. Comfortable cabin space with the ease of driving.

Available with both 2WD and 4WD, the Alto Turbo RS comes with the engine of 3-cylinder DOHC with a displacement of 0.66cc, just like the kei car regulations dictate. The output is 64 hp and 95 Nm from 3,000 rpm.Performance upgrades also include stiffer suspension, 13-inch front discs, bucket seats with integrated headrests and a revised steering system. 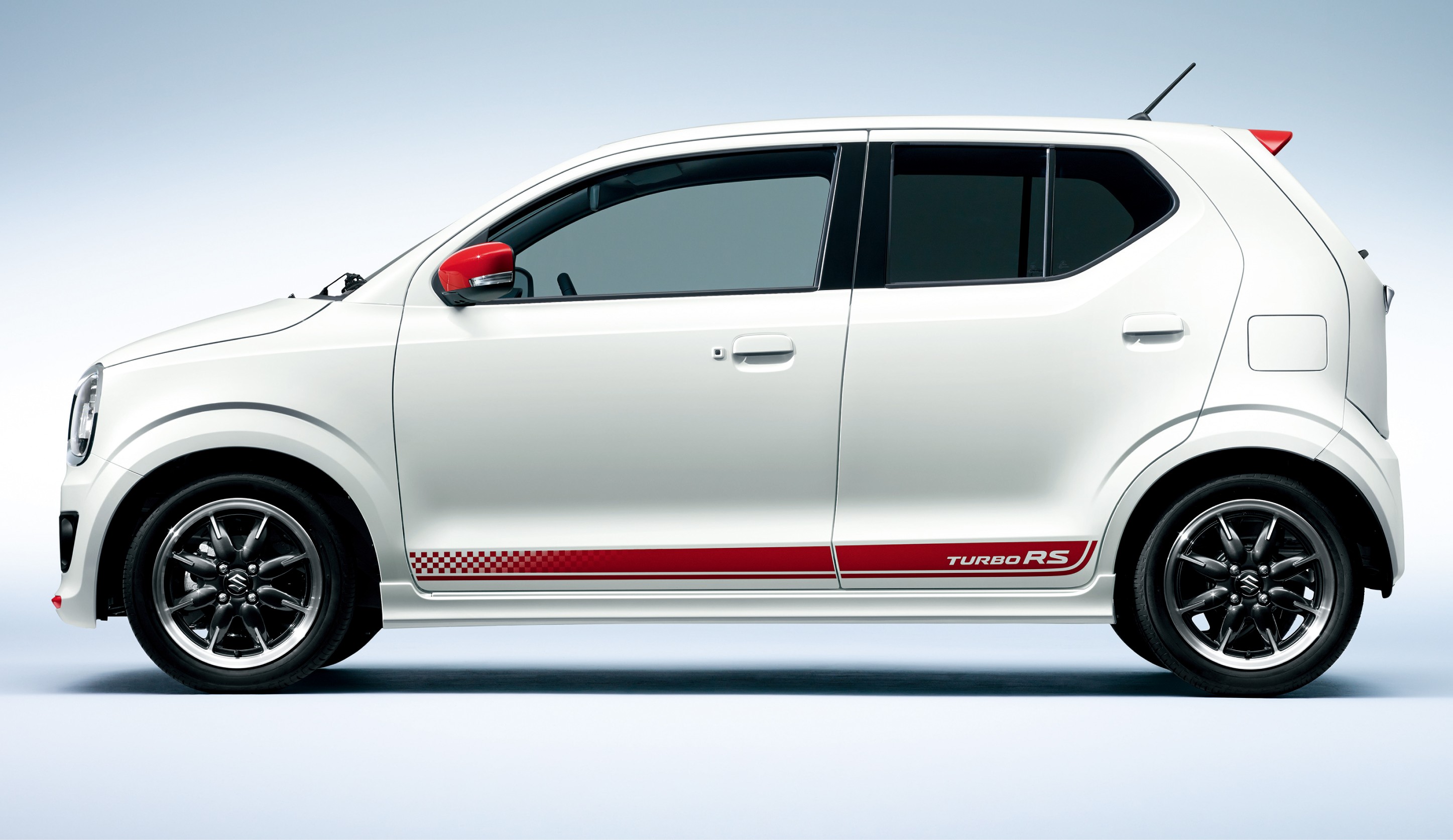 The little pocket rocket only weighs 670 kilograms or 720 kg in the case of the AWD model. That makes it about 30% lighter than a European A-segment car. And did we mention the Suzuki is tiny? From bumper to bumper, it measures 3,395 mm and its overall width of 1,475mm should make it maneuverable around busy Tokyo streets. 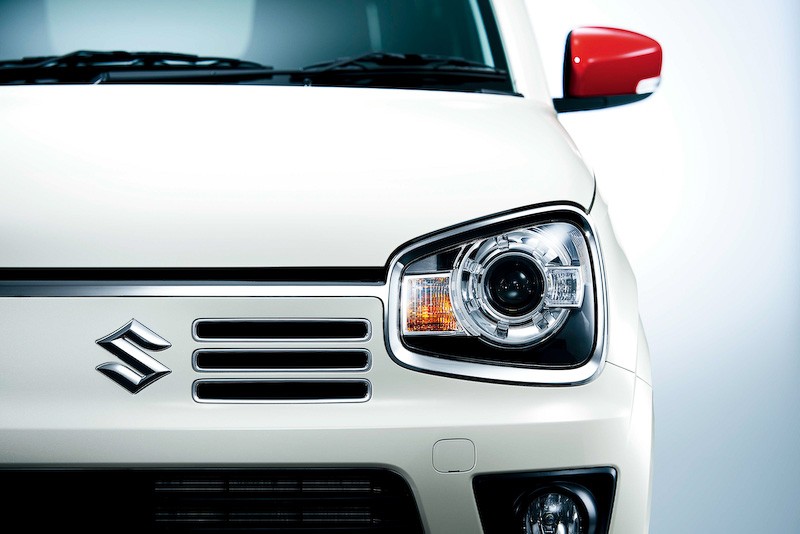 A number of cosmetic changes are there to let you know the Alto Turbo RS packs more punch. The headlights have been garnished in chrome trim, the power front bumper is red and so are the mirrors. 17-inch black alloys are fitted as standard with 165/55 R15 75V Bridgestone tires. Around the back, a red spoiler and extra stripes add curb appeal.

Equipped with a turbo engine, the new Alto turbo RS to enhanced sports performance, concept model equipped with Recaro seats and 17 inches aluminum wheels, tuned specially under body. It is a model that proposes fun to manipulate with a sharp response and high cornering performance. 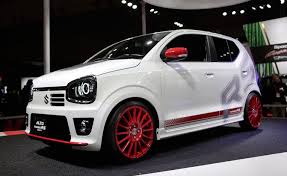 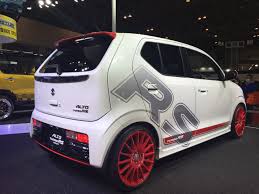 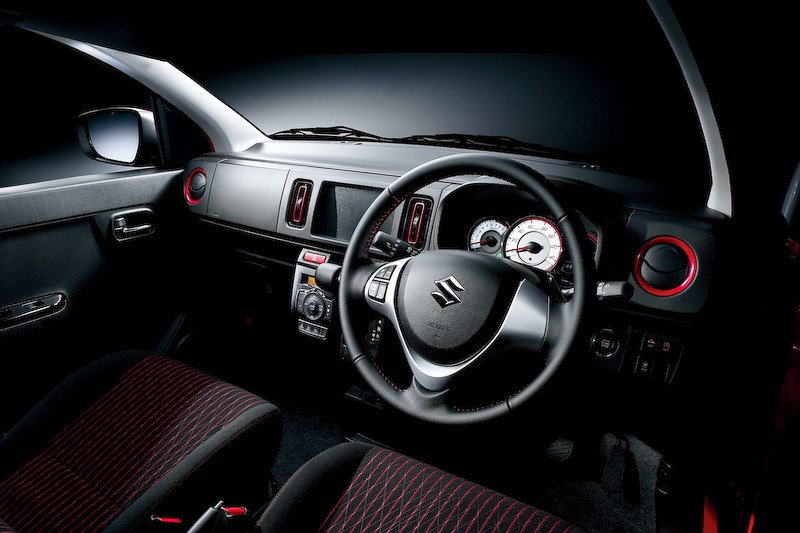